First Sale (for real this time)

Last September, the amazing Julie Czerneda, opened a call for submissions for an anthology set in her Trade Pact Universe (A Thousand Words for Stranger, et al). I wrote and submitted a story about the younger days of Thel Masim, a secondary character that appears in several of the books. The Trade Pact universe is a wonderful place and I’ve been hooked on it since I first encountered it, so the opportunity to contribute to it was irresistable.

On 27 October 2017, a day that will live in infam–I mean a day that will live in history (or my memory), I received an email from Julie that she was buying my story! (Wooohoooooo!) Four days later, on November 1st, (Samhain, All Saints Day, the Day of the Dead; could this be significant?) I returned the signed contract for the story.

In early December, I received payment! Actual money! For a story I wrote! Double Woooohooo! We emailed back and forth about changes she wanted and finalized the story on or about 5 January 2018.

The anthology, The Clan Chronicles: Tales From Plexis, is due 4 December 2018 from Daw Books. If you feel so inclined, feel free to pre-order it here. The Amazon link doesn’t show the cover art yet, but here is what it will look like. Art by Roger Czerneda: 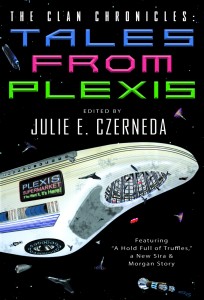 Cover of Tales from Plexis

I’ll always be grateful to Julie for buying this story, and for allowing outsiders to contribute to her worlds.